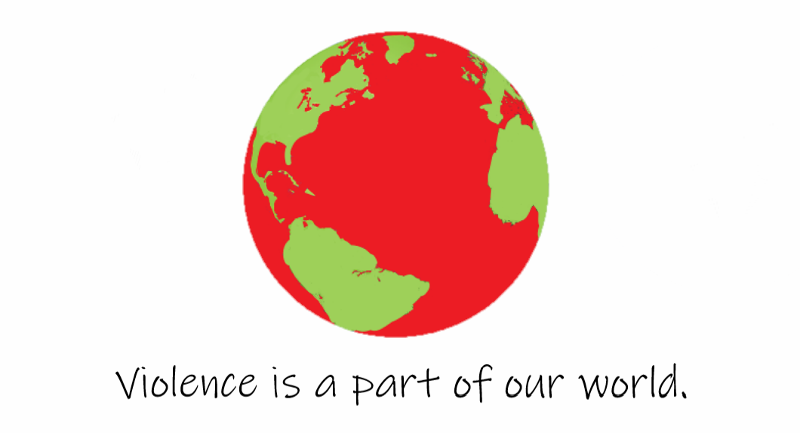 Has our society become more inherently violent? Or are we just more aware of violence in different parts of the world due to faster communication? The answer is a bit of both. The harsh truth is that every member of society is affected by desensitization to violence, but there are ways for prevention regardless of what stage of life you are in.

During childhood development, children are constantly questioning their surroundings in order to understand the vast world that they are becoming a part of. Teachers may unknowingly enforce certain gender norms by separating children by gender in lines. Parents may separate their children by gender for play dates, only allow children to play with certain toys, only allow children to only wear certain colors, or encourage their children to perform specific chores based on gender.

Common phrases that parents may tell their kids, like “Man up” or “Boys don’t cry” lead growing boys to believe that they are not allowed to have emotions. These actions only reinforce existing stereotypes, allowing abuse or other violent behaviors to infiltrate our society. As a result, young boys are led to believe that violence and anger is the only way to resolve a situation. Young girls on the other hand are led to believe that they are inherently weak or inferior, allowing society to view women as victims. These standards simply enforce a culture of violence and sexism.

Older adolescents are especially vulnerable to violent influences because of developmental processes that are taking place. These late adolescents’ psychological functioning is affected greatly by the entertainment media, which contributes to emotional desensitization. For example, constant exposure to violence in video games decreases the ability for teens to elicit guilt. Those who frequently listen to rap music may become desensitized to lyrics that condone relationship violence, sexual aggression, and objectification of women.

Even if none of the instances mentioned above apply to you, believe it or not, you have been desensitized to violence. One of the most horrific incidents that we repeatedly hear in the news is the case of mass shootings. The Sandy Hook shooting in 2012 affected everyone more deeply than more recent shootings. Why is this the case? The reason for desensitization to violence in particular is our tendency to adapt to trauma. The more we think that there was nothing that could be done to prevent a tragedy, the more immune we become to it when it repeatedly happens.

Why is desensitization bad? As emotional sensitivity decreases, the tendency to perform acts of violence increases. There are simple steps you can take to avoid being desensitized. Most importantly, be more mindful of your actions and their consequences. Adapt a “think small” philosophy when you feel like you are unable to have an emotional, empathetic response to a tragedy. Read about individual stories and place yourself in a single person’s shoes. Then, consider finding a way to help that individual somehow. The power to create change is in your hands.

Shobha Srinivasan is a rising senior at Notre Dame High School in San Jose. She is passionate about social justice and hopes to leave a meaningful impact on the world.