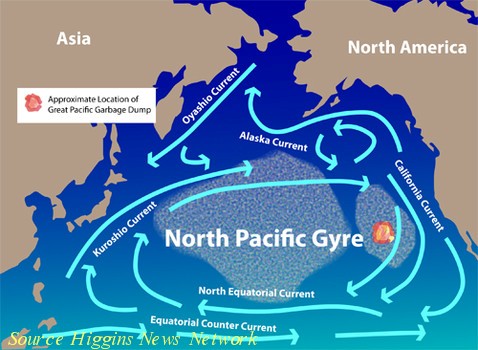 You have probably heard of a huge garbage patch in the middle of the Pacific Ocean, thinking to yourself, why haven’t they cleaned it up right now?  Let’s take a deeper look into the North American Plastic Gyro and its creation, what we can do currently, and how you can help.

Now, let’s start off on how the plastics got there in the first place. Humans have been mostly negligent and throw out the plastic. Landfills are also the problem as the plastics are left to decompose. However, it takes 500 years for plastics to start to decompose. When it breakdowns, it leaches harmful chemicals and becomes little plastic shards that are not visible to the naked eye. The plastics that get into the ocean are floated by the sea currents, which brings it to the center of the currents, forming the larger garbage patch. The garbage can’t float away due to the currents.  So, it stays, slowly but surely starts to breakdown. It’s unbelievable, but the gyro has grown to the size of Texas (270,000 square feet), the largest state in the U.S! Furthermore, that was just the minimum of an estimate. It could also be up to about the size of Russia (5,800,000 square feet), the largest country in the world! And that is just the tip of the iceberg.

If there is so much of this plastic in the ocean, why not just take them out? Well, there’s another issue with that. Since so much plastic is being broken-down at once, some have turned into the microscopic level, making nets useless. Even if we picked up all the huge plastic, the estimate for the microscopic plastic would still cause major wildlife damage. Because aquatic animals don’t have good eyes, and with attractive colors on plastic, aquatic animals mistake for food and eat the plastic, which stays in their stomach until it dies. Eventually, not only are viruses and disease spread around, people also have a chance of eating fish with toxic materials inside it, leading to serious hospitalization, and worst of all, even death.

What we can do right now is to sail towards the patch and remove all the plastic that is able to be picked up, such as new plastic trash, and do this until only the microscopic parts remain. But, with the rate of people throwing out plastic every day, there is not a day where the gyro is only microscopic parts. Recycling plastics could reduce the amount of plastic going into the ocean, and people are already seeing that recycling can save wildlife.

You might be thinking now, is there anyway to fix it? Yes, there is! You can donate to companies like The Ocean Cleanup to clean up most of the trash. You could also contribute to scientists who work on direct ways to clean up the ocean. Also, recycle your bottles and cans. Help the world, help yourself.

Nathan Ngo is an 8th grader who is currently going to John Muir Middle School at San Leandro, CA. He is 13 and likes to play video games in his free time. In the meantime, he does a lot of activities such as swimming and piano, but also has a lot of awards including one for being in the honor roll for 2 years.