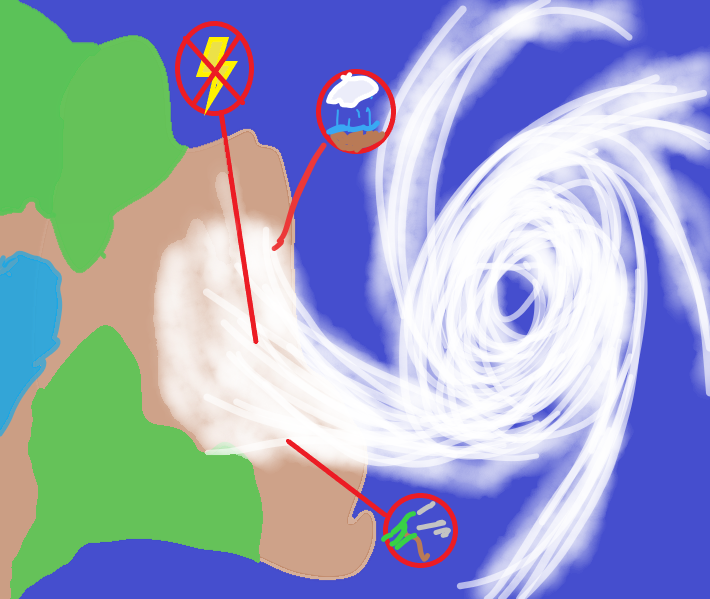 Hurricanes are now growing to be a problem bigger than ever, with the help of climate change. For an example of this, look at Hurricane Maria, a category-5 storm which happened in 2017, which caused more than 91 billion dollars of damage, and which attributed deaths ranging from 1400 to 5700. With that, let us look at why this is such a big problem now of all times.

Hurricanes cause damage in a variety of ways, some of which is heightened by climate change. For example, storm surges (a wave of water pushed by a hurricane’s winds) do more damage due to higher water levels, since the main way they cause damage is through flooding an area. Climate change is also increasing the levels of rain, as hotter air holds more water, which increases the amount of rain that a hurricane’s clouds hold. Hurricanes are also growing faster, as there is more of the hot ocean air that fuels them.

Currently, the US’s protocol is at first, evacuation or sheltering, then recovery, rebuild, and return. One of the major players in that is FEMA (Federal Emergency Management Agency), who coordinate responses to natural events and disasters. FEMA has been criticized in the past for its slow response. It is plausibly due to almost no mitigation done by local communities, or lack of forethought in preparation for a potential hurricane. For an example, look at Puerto Rico’s PowerGrid, which failed to modernize before hurricane Maria, and subsequently had the entire power grid wiped out. A study conducted by Arizona State University on hurricane preparedness shows an estimated need for relief at around 10 billion, but only 10 million is being allocated for preparedness, which is a huge short fall in planning and budgeting.

There are a few possible solutions to help prepare and mitigate the effects of hurricanes. An easy one would be to increase the budget for FEMA, although this would likely not be the most effective. Another solution would be to invest in strengthening utilities against hurricanes, for power outages are common in the aftermath of a hurricane. Building codes could also have an effect on this, as more buildings surviving the storm reduces rebuilding costs in the aftermath of a hurricane.

In summary, the new hurricanes of today are causing more and more damage than ever. In accordance with this, we should improve our mitigation and protection against hurricanes, especially before they strike. Our current system doesn’t do enough to mitigate its effects, but rather repairs afterwards. This needs to change, as investments now can save millions of dollars of damages if done correctly. We need change now, before it’s too late to help those affected.

About the Author: Troy Anthony Jose is a 14 year old aspiring writer, and his interests also include swimming, reading, and archery. He has career interests in industrial engineering, as well as biology.